he importance of developing a music-making practice which melds composition, improvisation, and performance has for some time been central to our conversations within Wet Ink about current trajectories in new music. Individually and collaboratively, we pursue the creation of works from a more holistic process of engagement from all the artists involved. While a personal exploration of my identity as a musician has grown to encompass roles beyond being a cellist, my work with Wet Ink has also changed my thinking about how flexible the roles of performer and composer can be.

Developing a more involved approach to performance has been crucial in developing my voice as an artist. I love my instrument and I love the challenge of digging into scores, but taking a more active role in the formulation of new works, whether as author or performer, has led to an even deeper understanding of my artistic desires and personal aesthetic. I have been fortunate to work with a close group of collaborators in Wet Ink; without them, my aesthetic and practical perspective as a performer would be vastly different. Fostering collaborative processes alongside artists with shared aesthetic values can open up enormous possibilities for exploring one’s own creative interests.

Creating pieces from the position of a performer and improviser requires a different set of tools than those used by someone who identifies solely as a composer. As my practice as an improviser has grown, I’ve more consistently found myself drawn to the aspect of performance which involves creating and manipulating the form and proportion of a work in real time. For me, this means approaching a new work from a macroscopic level, and thinking visually about its proportion and density.

Three recent works in which I explored different ways of developing new material include my solo composition, Cara II (2019); binary/momentary iii (2018), a collaboration with Sam Pluta; and Duo (2020), a piece I composed to be performed by myself and Josh Modney. These pieces represent important points in my path to redefine my relationship with authorship and to push myself into a more comprehensive form of music making. The evolution of these pieces relied heavily on the development of a shared lexicon of musical practice and creation among the Wet Ink musicians. With such a deep understanding of vocabulary between collaborators, it's possible to quickly transcend the “nuts and bolts” feeling of developing a new work and move to broader concepts. The freedom in the way these pieces developed was made possible by the years of shared musical experiences which honed a musical language in which we are all fluent.

I've been inspired by projects in which improvisation created crucial structural material for a completed piece. My widely-spaced musical interests converge on this point: improvising a piece in “real-time” can lead to final works as compelling as those “written” from the start. This model of composition has drawn together these many parts of my creative musical life, and allowed me to adopt different roles in the process of making music. In embarking on my Cara project, I aimed to construct a series of pieces which were improvisationally conceived but compositionally focused. The session in which I performed Cara II was one of the first in a series of sessions with this objective.

In Cara II, I dramatically detuned the cello, which shaped the potential sonic landscape via the instability of the loose strings. This allowed for the development of material that is starkly minimalistic, yet dense and rich in texture. It vacillates between the sound of the bow sputtering across the instrument and the groaning of the cello’s detuned strings. The arc of the work is such that even moments of rest are perceived as moments of uncertainty; the most musically static moments of the piece are unstable and full of motion from the indeterminate sounds of the altered instrument. Rather than searching for ways to move on from this material, I continue to come back to this texture for extended periods of time.

Having for many years specialized in contemporary performance and premiering new works, the Cara project felt like a natural extension of my path. The pieces we perform in Wet Ink often pull musicians out of the traditional roles of composer or performer. In a truly collaborative environment, the performer is not simply a tool to carry out operations on their instrument, but rather an integral piece of the work's creation. It naturally follows that the inverse can also be possible: that compositional material can originate from the performance itself. That is, performance and improvisation can produce the material, concepts, and ideas later refined and transcribed as “composed” works.

The way Sam Pluta and I developed binary/momentary iii is an example of this method of generating new work. Our approach initially arose out of necessity; Sam and I planned to begin work on a new piece together, but Sam had just moved to take on a teaching position at the University of Chicago. We agreed that we wanted the piece to be a true collaboration, one that was deeply interactive on both our parts. Sam came up with the idea to build the work from a series of audio “postcards,” in which we would each record material at home and send responses back and forth. This format was a novel way for us to connect to the idea of improvisation as a compositional tool, and from these recordings Sam transcribed our final work into what became the score for the piece.

Like Cara II, binary/momentary iii also explores reversing the functions of minimalism and density. Of particular aesthetic interest to me is finding the point where one extreme becomes another; when something wild is so continuously unpredictable that it begins to feel predictable and minimalistic, or when something is so minimal and spare that the experience becomes oppressive. This is particularly evident in the first and last movements of binary/momentary iii. Both can be perceived as fully static and yet full of motion. The first is continually dense with screaming intervals, and rapid shifts between pizzicatos, glissandos, and tremolos in the cello while the electronics flare and glitch. It is so hectic that it becomes almost a wall of sound. The last movement is nearly immobile - the cello slowly sweeps up to a single dyad which is held against an electronic tone for nearly seven minutes. The tiny variations in the cello’s tone and beating of sound waves become enormously amplified. The music itself is so abrasive it cannot be ignored, yet the nature of it is so minimal that there is fundamentally no structural development. Proportion itself becomes the material.

Duo, for Josh Modney and myself, was conceived as the first piece in a series of collaborative duets including both notated and improvised material. I wanted to use the duos project to create a body of work over which I felt a stronger sense of authorship, while still incorporating improvised sections that would draw from the vocabulary that Josh and I share.

The melodic structure of Duo was designed around specific graphic imagery: leaves overlapping in uniform shapes but in infinitely and subtly diverse ways, creating a pattern which was simultaneously always the same yet always different. The core of the piece is straightforward and repetitive just as the image was; it is a series of ascending scales in irregular but not particularly divergent intervals. The material developed further when Josh and I met to workshop and experiment with the structure I was imagining, and the final piece is a mix between this through-composed material and improvised sections. Thinking of the piece as a visual work, I wanted to make radical choices about its proportions. When material is either radically longer or shorter than you expect, the macroscopic view of the work becomes the way the work is defined. The opening of Duo is significantly longer and more static than the remainder of the piece, in which all of the development takes place.

Working with artists with whom I share a creative musical language, in an environment where we all understand and respect each others’ aesthetic goals, has been vital to expanding my personal artistic practice. These relationships allow me to explore macroscopic-level ideas and concepts with an underlying trust that they will be realized in a way that is aesthetically true to my original vision. The Wet Ink community is uniquely positioned in that regard, in that innovation in collaborative practice is a core part of the identity of the ensemble. Fostering this type of process within the group has opened up enormous possibilities for exploring my own artistic interests and deepening and expanding the pursuit of my individual musical voice. 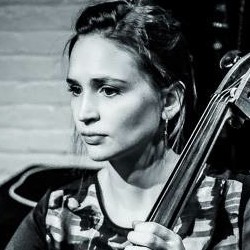 American cellist MARIEL ROBERTS is widely recognized not just for her virtuosic performances, but as a “fearless explorer” in her field (Chicago Reader). Her ravenous appetite for collaboration and experimentation as an interpreter, improvisor, and composer have helped create a body of work which bridges avant-garde, contemporary, classical, improvised, and traditional music. Roberts is widely recognized for her “technical and interpretive mastery” (I care if you listen) and for performances which seethe with “excruciating intensity” (The Whole Note). Roberts has appeared as a soloist and chamber musician across four continents, most notably as a member and co-director of the Wet Ink Ensemble (named “The Best Classical Music Ensemble of 2018” by The New York Times), as well as with the International Contemporary Ensemble (ICE), Mivos Quartet, Bang on a Can All Stars, and Ensemble Signal. She performs regularly on major stages for new music around the world, and has been featured wide variety of outstanding recordings. Roberts' compositions have been performed at venues such as Merkin Hall and Miller Theater in New York City.