“Scorch is the mark which remains after the flames. A reference and depiction of destruction.”

-effigy - the burning of a prototypical figure. Prototypical = “denoting the first, original, or typical form of something.”

In 2019 we began a project called Autopia [Lorway et al 2019, 2020, 2021], which explores the use of artificial intelligence as a collaborator in live coding performance. Autopia uses template-based genetic programming to generate SuperCollider code, and interfaces with the Utopia system [Wilson et al 2014] for collaborative live coding. Autopia also includes audience participation, with the audience rating what they hear through a simple mobile web interface and these ratings feeding into the fitness evaluation used by the genetic system. The motivation for the Autopia project is to demonstrate the use of AI technology as a “conversation partner” [Fiebrink and Caramiaux 2018], the emphasis being more on using AI to stimulate creativity than on trying to emulate creativity through purely mechanical means. 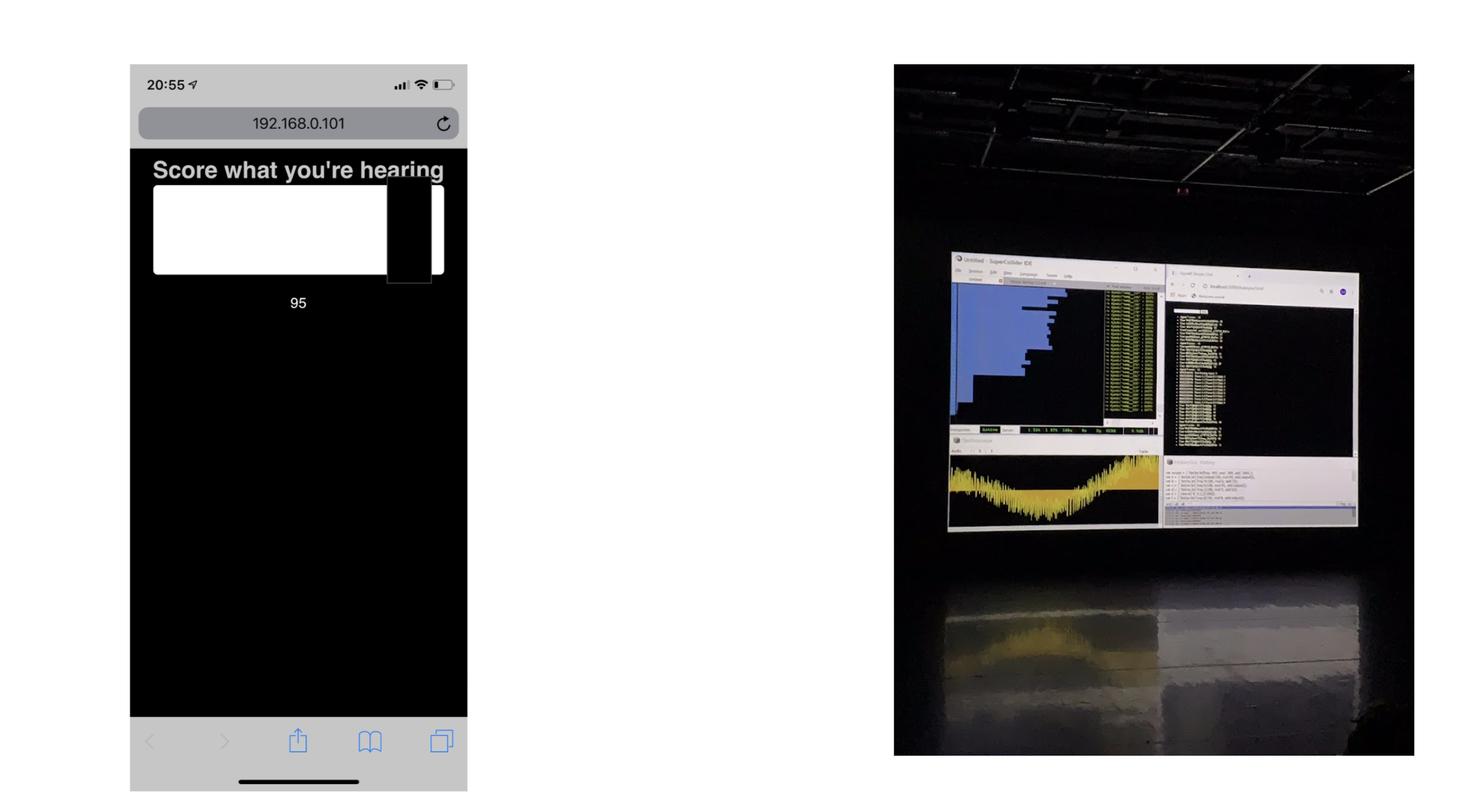 (Left): The web-based interface for audience participation. (Right): A photograph from the debut performance of Autopia.

Since Autopia works in a live coding environment, the medium it works through is code. This is, in a way, the “natural” environment for an AI system to work within, as opposed to more human-centric notations such as musical scores. It is debatable whether languages such as SuperCollider are “natural” for human performers and creators -- they may be for those with a certain background and level of experience, but there is a steep learning curve to reach this point. This led us to consider the design of live coding languages themselves, particularly for those not from a traditional computer science background, but from musical and artistic backgrounds. If a domain specific computer language could remove many aspects of confusion for beginners to programming by embracing simple(r) linguistics, then the computational composition possibilities would be available to more creators and performers, and less programmers. This would open up computational composition as a medium for all kinds of musicians, not just for computer scientists who dabble in music.

Scorch is a music programming language designed to be straightforward for those not experienced in traditional programming languages. Initially for algorithmic composition as a MIDI generating VST plugin, but ultimately intended to be used for live coding and a variety of media computing applications. Scorch has various AI implementations including an AI collaborator similar to the Autopia project which allows for collaboration with AI and human performers. 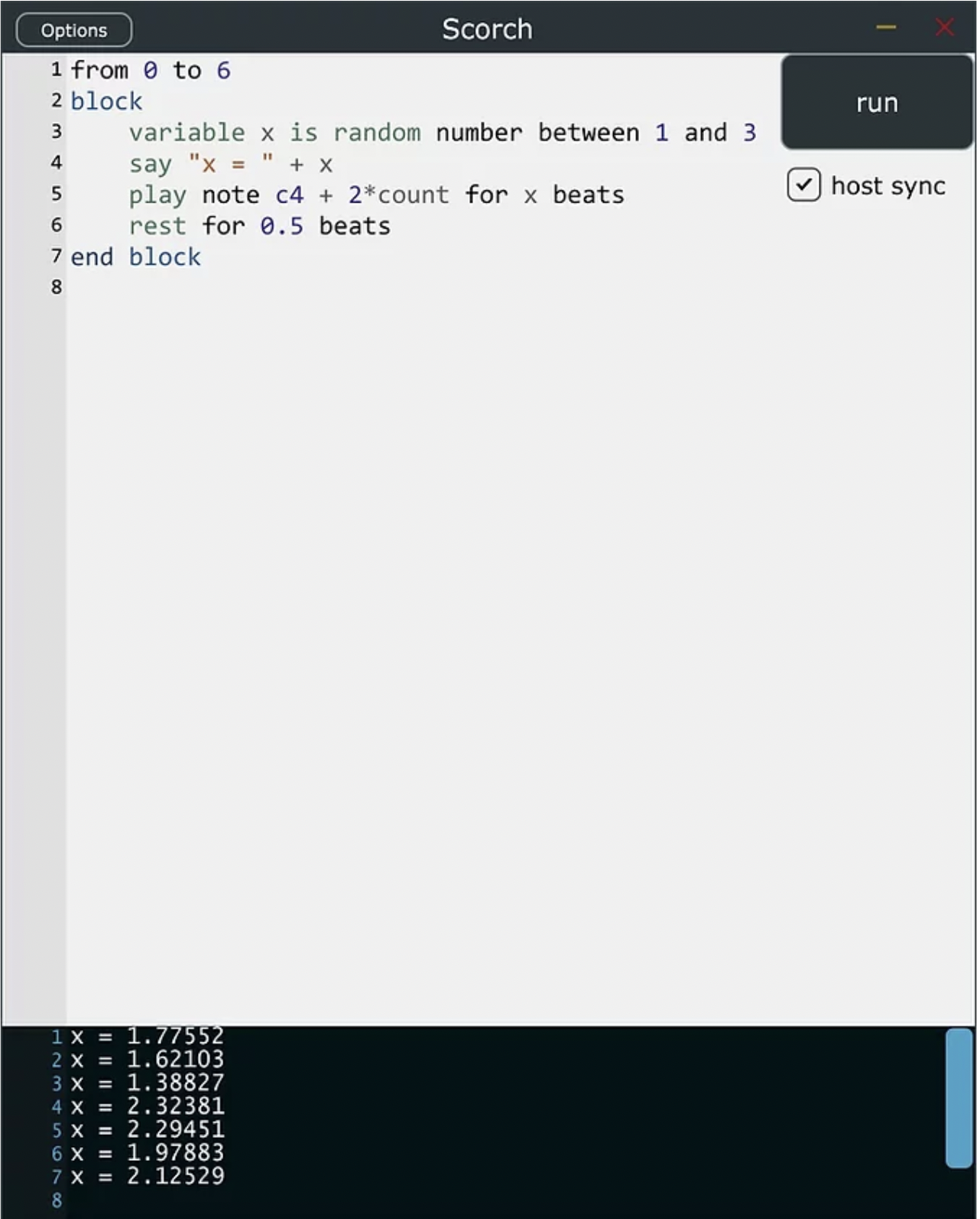 A TOOL, NOT A TOOLBOX

Scorch runs as a VST or AU plugin within the musician’s existing DAW setup, integrating seamlessly with existing synths and other plugins. Having the computational composition system as a component which drops into an existing environment, without the need for complex workarounds such as MIDI loopback devices or other hacks, means that the musician does not need to discard their entire existing workflow just to use our tool. We see coding as a tool, not as a toolbox. By design, Scorch relies on (and enhances) other software.

The TOPLAP manifesto [TOPLAP 2020] makes the case for “no backups”. This introduces a level of software arrogance, where the live coding software takes centre stage and cannot integrate or be supported by other methods or programs. If SuperCollider crashes mid-set, the audience is subjected to violent silence whilst the performer tries to troubleshoot the problem, which breaks the immersion of the performance. Scorch inherently invites users to engage other software to realise their sonic output, therefore mitigating the risk of catastrophic failure and countering the purist approach to live coding.

WHAT IF EVERYBODY COULD READ CODE LIKE YOU READ CODE?

Almost all programming languages in use today have syntax which is motivated by a desire to minimise the number of characters typed by the programmer, whilst also drawing influence from the notation of formal logic and mathematics. This results in programs which are more symbols than words, with beginners tending to get lost in a symbolic soup of pedantically placed brackets, semicolons and dots. In Scorch we have avoided symbolic notations wherever possible, instead making our syntax resemble plain English (with fully spelled-out words). Mathematical notation is restricted to the common operations of addition, subtraction, multiplication and division, and nothing higher-level than that. This makes Scorch programs more verbose than their SuperCollider counterparts, but this also means more readable. The loss of productivity of having to hit more keys is more than made up for by improving the accessibility of the language.

A note on “plain English”: the current version of Scorch is a proof-of-concept aimed at English speakers, which we freely admit already limits its accessibility. Full localisation of the Scorch language syntax for other written languages is planned for the future.

Who benefits from software under an open-source license? It is commonly argued that the users benefit, however in reality only a subset of users (namely those for whom the source code is useful and meaningful) benefits. Scorch is implemented in C++ by necessity, however we are not particularly interested in gearing it towards the sole benefit of C++ programmers. We are particularly mindful that “unrestricted use by any group in any field of endeavor [...] further entrenches established powers”, and “the copyleft requirement of open source can be a drain on limited resources, can expose sensitive or secure information, and can put software at risk of theft” [Nasser and Pipkin 2020]. To enable us to sustainably develop Scorch into a robust software product, whilst also seeking to ensure it empowers those who are currently under-represented in the field of computer music, we plan to adopt a commercial, closed-source distribution model for Scorch, with generous licensing for educational use, users outside of Western Europe and North America, etc.

Scorch offers a new approach to live coding languages and environments, integrating into already established setups and methods used by musicians who wish to explore computational composition. In developing and publishing Scorch, and through this manifesto, our aim is to open up the possibilities of live coding to a wider demographic, but also to provoke and challenge the status quo of what can, to an outsider, seem like an insular and tech-focussed field. Scorch is still in development, and is planned for release in early 2022.